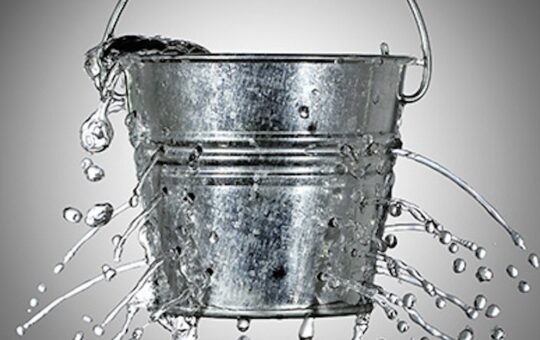 Business value is at the heart of business success. Obvious, right? The more value your business represents the more financially successful your business is. Businesses usually focus on building that value, year over year. How can we build more, sell more, earn more? The emphasis on building often hides a very crucial flaw in our effort: what if we are trying to fill a bucket that has holes in it?

That’s a pretty crazy thought, isn’t it? We all know that filling a bucket with of holes is going to take a lot longer to fill. But how often do we look at our business to see if it has holes?
There are three primary hidden areas where I find a business often loses or is in danger of losing value: Leakage, hidden risk, and transition. Let’s take a closer look at each of these.

Leakage:
Leakage is the most insidious of holes because it is often the most difficult to measure or even become aware of. Your bank gives you a credit facility at a 4.7% rate. That rate is tied to the risk that the bank sees in your business. Do you know how they arrive at that rate? If your rate is 50 basis points more than another customer, you are leaking value. An effort to lower your risk profile and obtain a lower rate will plug a hole in your bucket.

There are lots of ways that a business loses value. Years ago, I had the task of finding out why a law firm was less profitable than they had been three years before. It basically had the same number of employees, the same amount of business, and pretty much the same clients. The solution turned out to be pretty simple.

They were churning young attorneys. They would hire and then spend time and supervisory resources to train new attorneys, but they weren’t retaining those new attorneys long enough after they were trained. They kept leaving for firms that wanted experienced attorneys and who were paying more. Then theprocess started all over again. It was an investment of time and resources that were not being repaid.

Once the firm recognized the high cost of losing attorneys, they realized that an attorney with several years of training had more value than they were paying in compensation. The realized that they needed to invest more in employee retention in order to benefit from their original investment. We researchedmarket salaries and made adjustments, evaluated benefits and researched various nonqualified compensation plans to improve employee retention. After refocusing their efforts on retaining this group of attorneys, the churn stopped, and the profits came back. They had plugged an important and costly hole.

Hidden Risk:
Another hole is hidden risk. I had a large construction company as a client. Each year they spent a lot of time getting ready for the renewal of their commercial general liability policy. That was always top of mind and they paid a lot of money each year for that coverage. But an insurance audit uncovered a potentially disastrous hidden insurance risk to their business. They had close to 50 trucks and drivers on the road each day and yet they had a $1M/$2M auto insurance policy. A review of recent jury verdicts revealed that some of the highest awards, in the $7M to $10M range, involved automobile accidents. An $8M uninsured damage award would be difficult for this company to survive.

The solution? Increase the auto coverage and acquire large umbrella coverage, which was quite reasonable at the time. What is important to see here is that when risk remains hidden it is difficult to address and creates a gaping hole in the value of the business. But by uncovering the risk it became rather easy to address and with the hole plugged, a potentially significant hit to value was removed.

Transition:
One of my favorite events to watch during the Summer Olympics is the relay race. Four segments of the race, each run by a different runner carrying a baton. What’s the most dangerous part of the race? The three transitions where the runner hands off the baton to the next runner, all within a rather limited amount of space. Drop the baton and the race is over. That is the reasons that a relay team spends so much time planning and practicing for those handoffs.

Transition is just as risky for business. It is where a massive amount of value can be lost if mishandled. While a business goes through many transitions two of the most significant are owner exit and business succession. How are they mishandled? Simply by not being planned for.

An all too common risk is found in the two-owner business. Often two partners start out and over 20 or 30 years build a business. They worked well together and never thought they needed a buy sell agreement. In fact, they often work so well together because their skills complement each other. As the value grows, so does the transition risk. Over 20 to 30 years, people change, situations change, health changes. The likelihood of a transition grows greater each year and if the business does not have a well thought out, funded and current buy sell agreement, it is quite easy to drop the baton.

If an owner’s partner dies without a buy sell agreement the survivor has a new partner: the deceased partner’s spouse. What happens if an owner dies and his or her family is dependent on the income from the business to survive? If one owner wants to retire and the other does not, what happens if the remaining owner does not want to buy out the retiring partner? What happens if an owner stops working or embezzles money from the business? These are all transition issues that can be quite costly to the business, its owners and their families.
A buy sell agreement is one of the best mechanisms for handling transition in these types of situations and it is essential for the value of your business.

I would argue that retaining the value you have built is as important as building new value and getting new customers. Leakage, hidden risk and the failure to plan for transition are three often-overlooked risk areas. If you would like to explore these topics further, follow our blog for more detailed discussions on these and other interesting business and estate planning topics.